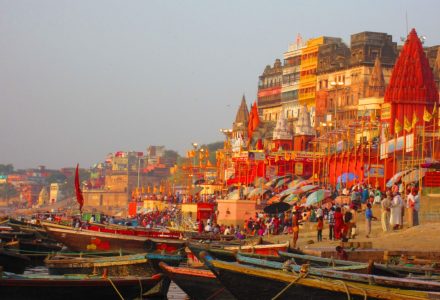 As per Mythology, Lord Brahma performed Das (ten) Ashwamedh sacrifices here & hence the name, It is also known as Brahma... 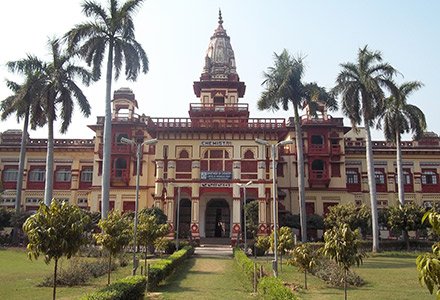 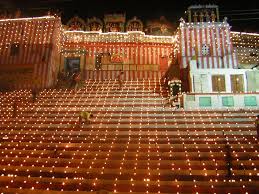 According to the ancient history, it is said that the Goddess Durga (Consort of the Lord Shiva) had thrown her sword... 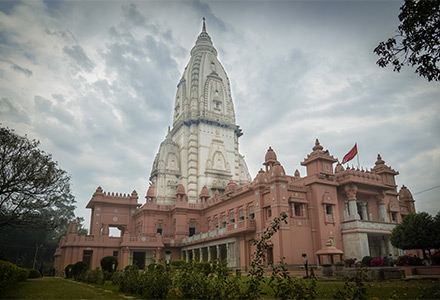 The new Vishwanath Temple of Varanasi is located in the premises of the Banaras Hindu University (BHU). It is also called... 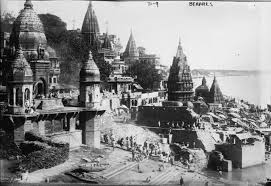 It is one of the most famous, sacred and oldest ghat in the Varanasi, Manikarnika is the most prominent & known... 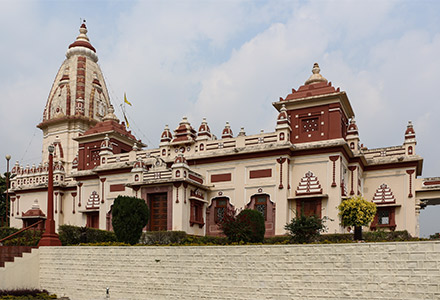 At a walking distance of 0.7 km from Brij Rama Palace. The Kashi Vishwanath temple is located in the heart of... 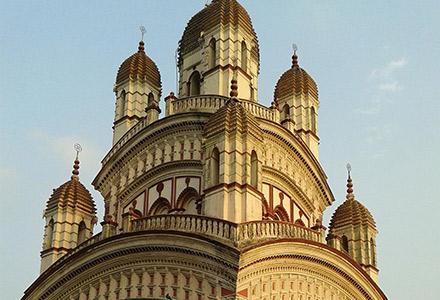 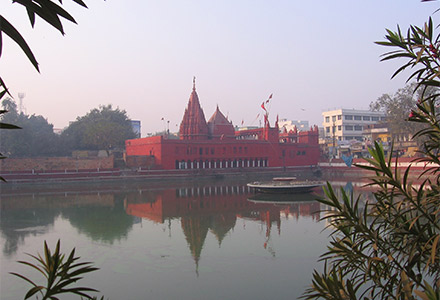 2.5 kms from Brij Rama Palace. Durga temple is one of the important temples of Varanasi. This temple is dedicated... 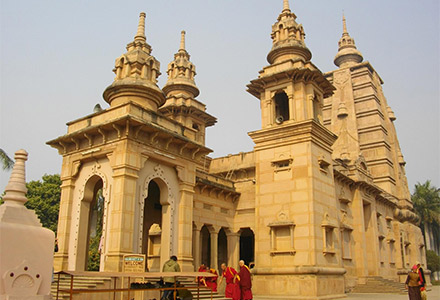 3 kms.from Brij Rama Palace. Sankat Mochan temple also known as the "monkey temple" is one of the sacred temples... 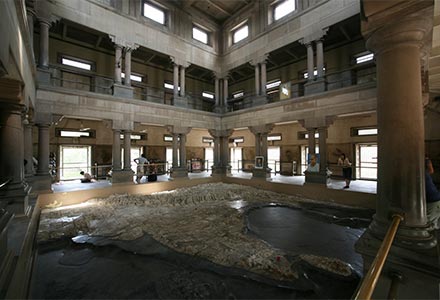 At a distance of 4 kms from Brij Rama Palace. The Bharat Mata temple at Varanasi is the only temple dedicated... 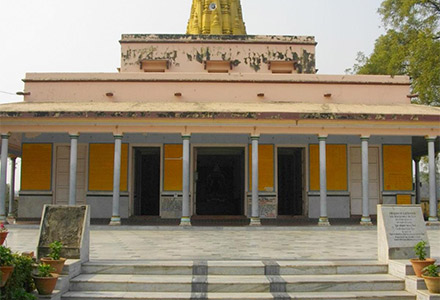 Sarnath, about 9.5 kms from Brij Rama Palace, is the place where Buddha chose to deliver his first sermon. The celebrated... 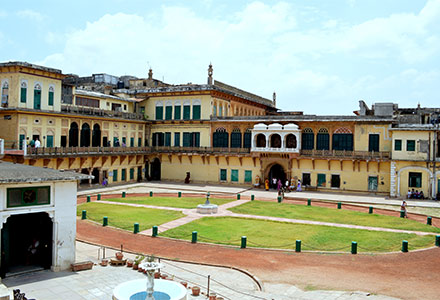 It is situated around 13 km from the Brij Rama Palace by road and at distance of 45 mts. Boat ride... 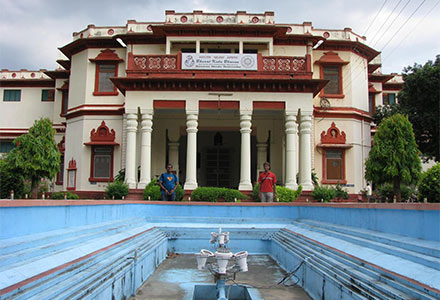 In the cool and calm surroundings of B.H.U is the Bharat Kala Bhavan which has established in 1920 A.D. and has...

Of all the Ghats along the Bank of the Ganges, this is the most popular Ghat and is the hub of pilgrim’s morning and evening. The present ghat was built in 1748 by Peshwa Balaji Bajirao and is the venue for the Famous Morning &amp; Evening Ganga Aarti wherein thousands of earthen lamps are immersed in the Ganges and is a Site to behold.

This famous Ghat is adjascent to the Brij Rama Palace & our guests can take a boat to see the Aarti from the water which is an experience in itself.

5 kms from Brij Rama Palace Banaras Hindu University (B.H.U) founded by Pandit Madan Mohan Malviya in 1917 AD is the largest residential University in India. At the entrance, there is the grand statue of its founder and the Vishwanath temple in its centre.

The huge temple was built in 1966, under patronage of the Birlas. It has a 677 meter high rising white top and its well carved architecture attracts pilgrims.

According to the ancient history, it is said that the Goddess Durga (Consort of the Lord Shiva) had thrown her sword in the river (called Assi River) after killing the demon Shumbha-Nishumbha. It is located at the union of the River Ganga and Assi River.

At this ghat, a huge Shiva Lingam is situated under the Peepal or Banyan Tree. Some of the known festivals such as Mahashivaratri, Ganga Dashahara, Ganga Mahotsav etc. attract tourists to this Ghat.

The ghat is also the venue of a unique cultural and spiritual event — Subah-e- Banaras — that draws large numbers of visitors every morning. This amalgamation of culture, music and yoga has now become an integral part of the itinerary of every tourist visiting Varanasi. It commences at 0500 hrs each morning, at BrijRama Palace arrangements for the same can be made for Guests wishing to attend

The new Vishwanath Temple of Varanasi is located in the premises of the Banaras Hindu University (BHU). It is also called the Birla temple as the famous industrialist family of India, the Birlas, constructed it. The New Vishwanath Temple is dedicated to lord Shiva and is a replica of the original Vishwanath temple. The temple is built in white marbles, and was planned by Madan Mohan Malviya, the founder of the Banaras Hindu University.

The most important characteristic of the new Vishwanath temple is that it is open to people from all castes and religions. The huge campus of New Vishwanath Temple is a delight to the eyes of visitor. The interior has a Siva lingam and verses from Hindu scriptures are inscribed on the walls.

It is one of the most famous, sacred and oldest ghat in the Varanasi, Manikarnika is the most prominent & known also as the burning Ghat with historical importance, associated with the Hindu Gods, Lord Vishnu and Lord Shiva. It is considered that the one who is cremated at this ghat will attain Moksha, freedom from the cycle of Birth and Death.

Manikarnika Ghat is also famous for the temple of the Lord Shiva and Mata Durga which was built around 1850 & is the holy shrine of this Ghat.

It is also considered that the Charanapaduka (the footprints) of the Lord Vishnu is here in a circular marble slab, as Lord Vishnu has mediated for many years at this ghat.

Observatory at Man Mandir Ghat was built by Savai Jai Singh-II in 1710. Observatory has huge instruments made from stone and was once used to study the movement of sun, moon, star and other heavenly bodies. Jantar Mantar is the highlight of the observatory which is similar to Jantar Mantar located in Delhi, Jaipur, Ujjain and Mathura. There is a fine stone balcony in the northern part of the Ghat. Devotees pay homage here to the lingam of Someswar, the Lord of the Moon. Dom Raja’s house is next door, with painted tigers flanking the terrace. Doms, who handle the corpses at cremation grounds, are untouchables.

In Hindu religion it is believed that a simple glimpse of the Jyotirlinga is a soul-cleansing experience that transforms life and puts it on the path of knowledge and Bhakti (devotion). A single darshan of Vishweshwara Jyotirlinga is considered to merit more than the darshan of other jyotirlingas, scattered in various parts of India. The Kashi Vishwanath Temple has been a living picture of the timeless cultural traditions and highest spiritual values.

2.5 kms from Brij Rama Palace. Durga temple is one of the important temples of Varanasi. This temple is dedicated to Goddess Durga. The Durga temple was built in the eighteenth century. A Bengali Maharani built the Durga temple in Nagara Style (the North Indian style of temple architecture). It is stained red with ochre and has a multi-tiered shikhara (spire). The Durga temple is situated on a rectangular tank, called the Durga Kund. According to the Puranas, Goddess Durga has kept this place for many centuries and protects the holy city, Varanasi, from the South.

The statute of Bharat Mata is built in marble and is a model of undivided India, depicting the mountains, plains and oceans. The most peculiar thing about the Bharat Mata Temple is that instead of the customary gods and goddesses, it houses a relief map of India, carved out of marble.

Sarnath, about 9.5 kms from Brij Rama Palace, is the place where Buddha chose to deliver his first sermon. The celebrated Mantra, ‘Buddham Sharanam Gachhami’, owes its origin to Sarnath.

On the day before his death Buddha included Sarnath along with Lumbini, Bodh Gaya and Kushinagar as the four places he thought to be sacred to his followers. It makes Sarnath one of the most venerated Buddhist places. Besides Buddhism, Sarnath is also connected with Jainism.

It is situated around 13 km from the Brij Rama Palace by road and at distance of 45 mts. Boat ride by Ganges. Ramnagar Fort looks very elegant from the western bank of the River Ganges as it is located at the scenic place opposite to the Tulsi Ghat.

It opens daily, except the holi festival, from 10 am to the 5 pm. Ramlila fair at the Ramnagar Fort attracts more crowds otherwise throughout the year there is an optimum crowd.

In the cool and calm surroundings of B.H.U is the Bharat Kala Bhavan which has established in 1920 A.D. and has a vast collection of paintings, Hindu and Buddhist sculptures and other materials of archeological studies.

In the main hall of the Bhawan, there is a figure of a man standing on one leg and one hand on his hip and lifting a mass of stone above his head, with one hand. The figure is said to be of Lord Krishna lifting Govardhana.

Bharat Kala Bhavan remains closed on Saturday and Sunday both and open on week days between 10 A.M. to 5:30 P.M.